In the mid 80s, I became fascinated with my dad’s (DL2SDQ/SQ3BDQ) amateur radio hobby. After taking a class offered Hugo (DK4SB), I was licensed in 1990 as DH9SBL at the age of 17 and joined the DARC OV P40 Unterland.

During the first years I was operating mostly SSB and some RTTY/SSTV on HF. But then I was more and more fascinated by CW. Now, I really enjoy CW and 90 % of my QSOs are in CW.

In 2000 I started operating in contests. Since then, I try to be QRV in each big contest. But I also enjoy a lot the small national contests. Two years later I changed my callsign to DH9SB.

2008 we moved from Heilbronn to Erzhausen near Frankfurt. And in december 2010 back again to Heilbronn. 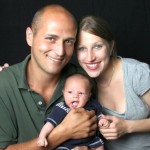